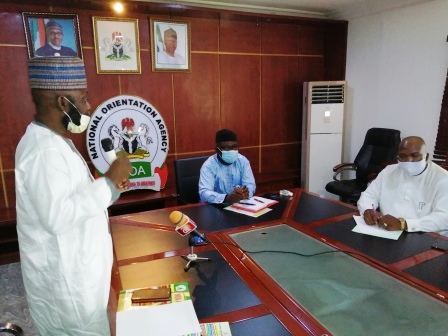 The Director-General National Orientation Agency (NOA) Dr Garba Abari has assured the FCT health Insurance Scheme (FHIS) of his willingness to collaborate with the scheme in terms of information Dissemination.

Dr. Garba Abari who gave this assurance during a courtesy visit on him by the Management Team of the FHIS in his office in Abuja, said the platforms of information dissemination of the NOA will be made available because of the long adage which says “health is wealth.”

The NOA DG who was represented by the Director Human Resource Management Mr. Kahinde Ogunkuade welcomed the visiting delegation before going on to relay the director general’s message.

“We will first and foremost in this collaboration give you our access to the nook and cranny of the FCT so that people will appreciate it, because a healthy workforce is necessary in this country so that the economy will grow well” and then transcend to the 774 local governments in Nigeria. He said.

He used the medium to call on all those who are yet to enroll to do so “the Federal Government has made available some funding for basic healthcare, so everyone should and must be encouraged to take advantage of this”

Earlier the director FHIS Dr. M Ahmed-Danfulani explained that only about 5% of the entire country’s population is covered by health insurance and the remaining 95% will have to use out of pocket money to acquire any healthcare service.

Dr. Danfulani further explained that out of pocket spending for healthcare usually ends up in what is referred to as Catastrophic Expenditure.

“One of the easiest ways that people are being pushed into poverty, is spending out of pocket expenditure, so in their wisdom the Federal Government has set aside through the National Health Act one per-cent of the consolidated revenue of the FG which is to be released annually, indeed this has been released previously but the guideline has been reviewed, and the reviewed guideline has just been approved by the national council on health”

“When this comes on board, it’s going to make available healthcare to most Nigerians at very affordable prices, not minding the fact that some people are still going to pay, but for those who are not able to pay, this programme is going to take care of their health, and invariably we are going to witness a reduced number of people pushed to poverty as a result of out of pocket spending”

Dr. Danfulani Added. The FHIS Director said the reason they chose to visit the NOA is for the NOA to use all their platforms to let those in the grassroots be aware of such a programme.

“The National Orientation Agency are already into the business of information dissemination and not only do they disseminate information, they also try to reorient the masses on the importance of the information they are disseminating, we are also going from ministry to ministry, agency to agency to invite them into this programme”

Dr. Danfulani was quick to dispel the misinformation that Health insurance was only for the workers in the public sector, “It is true that only the public workers were enjoying health insurance when it first started but as I speak to you every Nigerian can join the health insurance with as little as N13,500 per year, they can have their healthcare covered so nobody is going to be left out.”

The meeting which was made up of directors from both organizations agreed to set up a small ad-hoc committee to look into the details of the collaboration.